A Tribute Not to be Forgotten

At a recent show, we took a moment to offer thanks to all veterans, active military, and families who were in the audience. We asked them to stand so all could applaud. Suddenly, a guy ran up to the stage and said, “Hey, there’s a WW II veteran here tonight. His name is Bud. Can you please pay special tribute to him.”

And naturally we did so. We were leaving the stage for a break when someone else ran up to the stage and said, “Hey, there’s another WW II vet here as well. His name is Richard and he served all over the Pacific.”

I got right on the mic and said: “We have some very special guests here tonight. Both of them are WW II veterans. Please stick around. When we come back from our break, we are going to do a special tribute to both.”

In almost every one of our shows, we do GOD BLESS THE USA as a tribute to veterans and military. Our version is very special because it is sung by our female lead vocalist, Jaime Lee Frank. We came back onstage and did the song. The audience exploded with applause, and we felt great about paying tribute to these two special veterans. 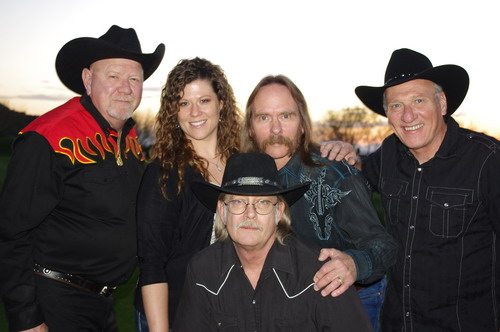 I thought that was the end of the episode, but when we returned to the same venue for another show two weeks later, a woman came up to us. “Are you the band that did that tribute with GOD BLESS THE USA two weeks ago.” She saw our BIG ZEPHYR banner and erupted into joyous expression. “That veteran you celebrated is my father-in-law. He is 92, and although he is troubled with Alzheiemer’s, he knew what you were celebrating, and it meant so much to him. He does not remember lots of stuff, but he remembers his role in that war and your tribute touched his heart.”

By this time, Jaime Lee and I had tears in our eyes as we took turns hugging this woman.

Those are the moments we live for as entertainers.